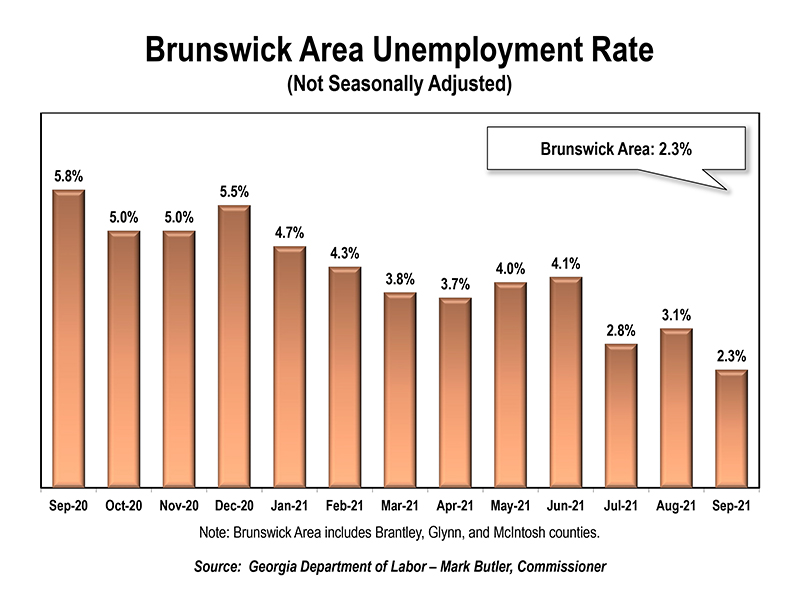 Georgia Labor Commissioner Mark Butler said Thursday that Brunswick recorded an all-time low unemployment rate of 2.3 percent, down eight-tenths of a percent over the month.  A year ago, the rate was 5.8 percent.

“We are seeing all-time low unemployment rates throughout the state of Georgia reflecting an economy that is continuing to rapidly recover,” said Commissioner Mark Butler. “We are working with employers across the state to post, recruit, and fill critical positions in preparation for a strong holiday employment season.”

Brunswick finished the month with 51,282 employed residents.  That number increased by 43 over the month and is up by 4,232 when compared to the same time a year ago.

Brunswick ended September with 43,500 jobs. That number remained flat from August to September and increased by 1,600 when compared to this time last year.

The number of unemployment claims went down by 56 percent in Brunswick in September. When compared to last September, claims were down by about 88 percent.

Visit dol.georgia.gov to learn more about career opportunities, Employ Georgia, and other GDOL services for job seekers and employers and to connect with us on social media.